So as my week in Goa ended it was time to move on to Dubai. I was entering the final stage of my trip. I had now been away for nearly 11 weeks and in 3 days time I would be home.

So it was a shame that my last experience in Goa was such a bad one.

The Air India flight to Dubai was fine. The airport in Dubai is mightily impressive. However there are obviously a lot of people flying in here. On my arrival at around 11pm on a Sunday evening there were long queues at immigration There were loads of immigration desks and most were open. All were manned by men in traditional Arab dress with long flowing white robes and heads covered. I queued for around half an hour and then got through without a problem. So the concern about needing a visa was unfounded. I understand the delays at Dubai airport are being addressed. There is a new iris recognition system being introduced which should mean for returning passengers it will take less time to pass through the airport.

Having arrived in Dubai quite late the previous evening I had a relatively lazy morning. I was staying in an apartment hotel fairly close to the Burjuman area. After a late breakfast I went for a walk to get my bearings. Temperatures were a very pleasant mid to high 20’s. It wasn’t the best area for sightseeing but I was struck my how clean and orderly everything was compared to India. I felt like I was in a completely different world. A world of finance, technology and high end shopping. I walked into a shopping mall. It was quite a small place relative to many others but I was gobsmacked by a floor which had shop after shop selling gadgets and IT peripherals. I lunched at another nearby shopping mall. The cafe had a very westernised menu. I ordered a tuna sandwich. It felt like I could almost have been in the UK.

Mosque in Dubai near Burjuman 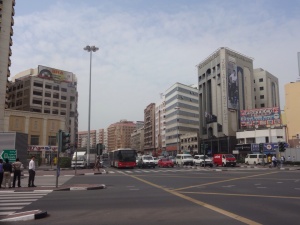 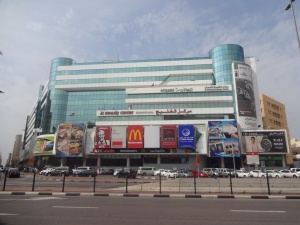 In the afternoon I was booked onto a tour out into the desert. So at around 3.30pm I set off from the hotel having been collected by a Pakistani tour guide working for the Arabian Adventures company. He was driving a lovely Toyota 4×4 vehicle which accommodated 6 passengers. The other members of the tour were a couple from Delhi who are doctors and three nurses from the US. We drove on motorways for an hour before entering the Dubai desert conservation reserve at which point we had a brief stop whilst our driver reduced the tyre pressure.

The first part of the evenings entertainment was a falconry display. This was followed by a thrilling drive through the sand dunes. I had a great view as I was sat up front with the driver. At times you almost felt that the car would topple over but these 4 wheel drive vehicles are excellent. In addition to us there must have been another 50 vehicles full of tourists doing the same as us. The tour runs 365 days a year so it’s a big business. After the drive through the dunes which probably lasted around 15 minutes we had a stop in the sand dunes for a photo opportunity as the sun came down. After the sun had disappeared below the horizon we drove to the village where we were to have dinner. But first there was the opportunity to ride on a camel. Now I have to say that I am not a big fan of camels and I did turn down the opportunity to ride one in Australia. But here it was included within the price of the tour and all the others members of the group were going to have a go so I went for it. I had a camel to myself and sat in the rear of the 2 seats. It was a fairly short ride but my camel was very well behaved. I was told to hold tight and lean back. The only slightly dodgy moment was when it was time to get off the camel when I could feel it’s movement may launch me forward. I ensured I kept my weight back. The camel driver took some photos of me for which I tipped him. 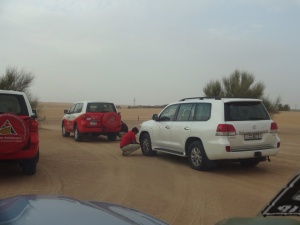 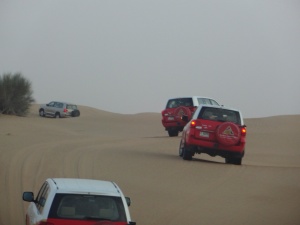 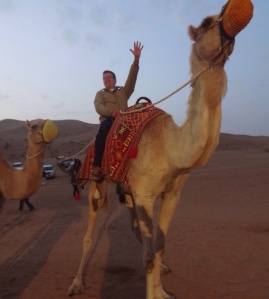 We then entered the village. I am not sure of its authenticity given this was essentially a tourist business but we had a very pleasant evening enjoying a buffet dinner whilst kneeling on cushions. The evening ended with a fantastic display of belly dancing and then some stargazing.

It had been an excellent tour out into the desert and I thoroughly enjoyed it.